My photos published by the Campus Times

Pomona Mayor Tim Sandoval packs up cleaning supplies in a trash-filled truck at the 12th annual Pomona Beautification Day Saturday. Hundreds of residents and volunteers from the community worked together at 33 project sites from 8 a.m. to noon. Volunteers picked up trash, planted trees, helped start community gardens and created what is soon to be Pomona’s first wilderness trail. / photo by Natasha Brennan

Firefighters work to contain a gas leak that caused an emergency evacuation of the Oaks dorms, Barkley Building, Leo Hall and the Arts and Communication building Monday afternoon. The gas line was hit during construction on a fire hydrant on the north side of Oaks A building. Students were asked to stay out of their dorms for three hours and cars in the surrounding parking lots were also inaccessible as starting the ignition could trigger an explosion. / photo by Natasha Brennan

Students in the Oaks dorm were evacuated after a gas leak was detected on the east side of the Oaks A Building Monday afternoon. The smell of the gas wafted down E Street. Housing staff entered each room to evacuate students and open windows to air out the building. Students were not permitted to re-enter their rooms for three hours. / photo by Natasha Brennan

Senior first baseman Nick Michaels catches the ball mid-air as Whittier catcher Michael Angulo makes it to first during the third inning of the first game of the doubleheader Saturday at Ben Hines Field. The Leopards beat the Poets in both games on Saturday, 10-4 and 7-6. / photo by Natasha Brennan

The University’s Chief Financial Officer Avo Kechichian bikes down Bonita Avenue Sunday for CicLAvia: Heart of the Foothills. Thousands of cyclists and pedestrians took over the streets of San Dimas, La Verne, Pomona and Claremont for the annual event. / photo by Natasha Brennan

University of La Verne artist-in-residence Rafael Liebich, on the Steinway piano, and Grammy nominated pianist Aron Kallay, on the toy piano, play “Man on Wiire,” by Isaac Schankler at the “Piano(+)” concert Saturday in Morgan Auditorium. The piece is performed using an accelerometer on a Nintendo Wii controller to adjust the piano’s tone. The performance included seven pieces using pianos, recorded electronic melodies and video installations. / photo by Natasha Brennan 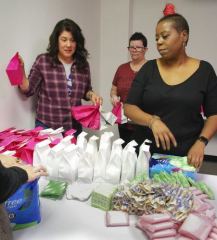 Roxanna Pena of Upland, Alexia Madigan of Temple City and Ehmandah Ramsey of San Dimas put together bags of feminine products March 17 at the She Stories headquarters in Claremont. Ramsey, owner of women’s empowerment organization She Stories, hosts monthly “Period Parties” where volunteers pack bags of pads, tampons and cleansing wipes with a hand-written, encouraging note for women in local homeless shelters. Items were donated by the 16 women who packed the items, their respective churches and Target. / photo by Natasha Brennan

Alumni Nicholas Franco and James Cockrell watch as Baldwin Park Police Officer Andy Velebil, a La Verne alumnus, and La Verne Police Department drug recognition expert David Weaver speak to a full house about the dangers of driving under the influence Monday in the Campus Center Ballroom. Phi Delta Theta’s DUI Awareness Night was created by Cockrell, who graduated in 2017, in memory of his uncle, who was killed in 2016 by a drunk driver. / photo by Natasha Brennan

Sisters Gabrielle, Kelli and Kaira Pozon of the band Ramekega perform their original song “Heartsick” at the Folk Music Center’s open mic in Claremont Sunday. The piece was inspired by the late David Bowie. This was the trio’s second performance at the Center./ photo by Natasha Brennan

Junior criminology major Clarissa Perez is No. 1 in scoring for SCIAC and No. 2 in the nation at Division III women’s basketball, scoring an average of 24.1 points a game. As point guard and shooting guard, Perez hit the 600-point mark in last week’s basketball game against Pomona-Pitzer. Perez made First Team All-SCIAC and hopes to join an All-American team and play professionally overseas after graduation. Perez transferred from the University of Antelope Valley where she played under current La Verne head coach Jason Pruitt. Of the 25 games played this season, Perez scored in double figures for 22 of those games. Her high was a 44-point effort against La Sierra. / photo by Natasha Brennan

La Verne forward Brandon Rice attempts a shot against the Redlands Bulldogs in the second half at Frantz Athletic Court Feb. 7. The Bulldogs beat the Leopards, 79-73.