“Hugo Reid once compared the Gabrieleño basket to the dodo bird–rare and beautiful.”

-People of the Willow House 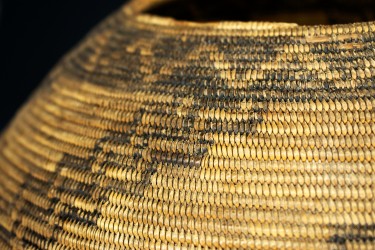 In honor of my book, “People of the Willow House,” turning a year old, I wanted to share some of the amazing photos in it. Authentic Gabrieleño baskets are incredibly rare. The tradition of burning one’s personal items after death to release their spirit to the Creator may be one of the reasons, archaeologists and Gabrieleño-Kizh Tribal Biologist Matt Teutimez say. The baskets were so tightly woven that they were water proof and the designs were famous. Hugo Reid (a Scotsman and early resident of Los Angeles famous for his letters about the local Native people published in the Los Angeles Star) later wrote that the baskets were “too well known to require description.”

This particular basket is held at the University of La Verne’s Cultural and Natural History Collections where it is carefully stored with nearly 200 other baskets made by tribes all over the U.S. The collection came to live at ULV after the David and Margaret Youth and Family Services center donated the baskets that were gifted to them by the family of a local woman named Louisa Hutchinson.

According to the collection’s curator Anne Collier, the basket was gifted to Hutchinson’s mother by a Gabrieleño woman when Hutchinson was an infant. It was used as a “baby basket” and became not only the basket that jumpstarted her collecting, but her prized possession. It is thought that Hutchinson, concerned about the romanticization of Native American culture that followed the popularity of Helen Hunt Jackson’s “Ramona,” was inspired to collect these baskets in order to preserve a beautiful aspect of the culture.

Want to know more about the Gabrieleño-Kizh tribe? Check out “People of the Willow House.”

I am particularly proud of these photos because they were a difficult get. Due to the rare and fragile nature of the basket, I was not allowed to touch the basket or use any lights. I even had to cover the autofocusing light on my camera with tape! I brought with me a clean black roll of paper, painter’s tape, a tripod and my camera. After, I set up my background and shot, the curator put on archival gloves and carefully placed the basket down. These photos are shot with only the available light in the windowless room and an extremely long shutter speed. I was so grateful for the opportunity to shoot this rare piece. I’m also extremely grateful that the experience inspired me to do more artifact shoots with a modified version of this technique. And the quality of these photos got my foot in the door at a couple more museums that opened up their collections to me!